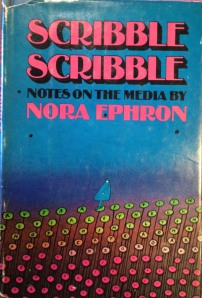 I felt a particular (and admittedly somewhat selfish) twinge of sadness when I saw on my phone yesterday that Nora Ephron died (and not just because I used to live across the street from the brownstone that Bruno Kirby tosses the wagon wheel coffee table out of). I was sad because even though I had grown up knowing Nora Ephron as a screenwriter and director—and then later as an essayist, as my New Yorker fetish grew—I had begun to know her as a press critic, journalist, and the co-organizer of the first A.J. Liebling Counter-Convention, a 1972 gathering of maybe 3000 journalists who were looking for alternative ways to do good work. And I’m writing my dissertation about (MORE), the journal of press criticism that sponsored the Counter-Convention.  I have Ephron’s phone number in my notebook. I was supposed to interview her. I missed my chance.

Ephron was a journalist first. As the Wall Street Journal obituary puts it:

Determined by high school to be a journalist, Ephron graduated from the single-sex Wellesley College in 1962, moved to New York and started out as a “mail girl” and fact checker at Newsweek. A newspaper strike at the end of the year gave her a chance. Victor Navasky, the future editor of The Nation, was then running a satirical magazine called the Monacle. He was working on a parody of the New York Post, “The New York Pest,” and asked Ephron for a spoof of Post columnist Leonard Lyons.

She succeeded so well that the newspaper’s publisher, Dorothy Schiff, reasoned that anyone who could make fun of the Post could also write for it. Ephron was asked to try out as a reporter. Within a week, she had a permanent job and remained there five years.

Victor Navasky also knew Dick Pollak, the editor of (MORE), and one way or another (New York reporters have a tendency to know each other), Ephron became involved with the (MORE) group, which started the magazine in June, 1971. By the spring of 1972, the trio that founded (MORE) had decided to sponsor the Liebling Convention (counter to the American Newspaper Publishers Association meeting). Ephron would co-organize the conference with (MORE) co-founder and Pulitzer Prize–winning New York Times reporter J. Anthony Lukas.

Most of the program was exactly as advertised in the printed program—great panels with Tom Wolfe and Pauline Kael and Murray Kempton and Gloria Steinem. Ephron’s future husband,  Watergate reporter Carl Bernstein, would attend a later convention (since the Watergate break-in wouldn’t occur until June). But for the “How They Cover Me” panel, Nora Ephron kept a secret (as she would with the identity of Deep Throat). Dick Pollak told me that even he didn’t know the identity of Ephron’s surprise panelist. Ephron said that the panelist didn’t want anyone knowing his whereabouts too far ahead of time.

And then about two weeks before the convention, Ephron told Pollak that there was a problem with her secret panelist. Crazy Joey Gallo, the racketeer-cum-celebrity had been murdered at Umberto’s Clam House in Little Italy. He would have to cancel.

Ephron contributed to (MORE) a few times, writing book reviews mostly, but that was because she had to save her media criticism for Esquire, where she was a contributing editor. Her book Scribble Scribble compiled those press pieces, writing with her characteristic warm but dark humor about Daniel Schorr, Gourmet magazine, Bob Haldeman and her former employer, Dorothy Schiff of The New York Post.

And while Ephron may be best known as a screenwriter and director, it’s worth remembering that even her movie career came from journalism. Carl Bernstein asked her to try a draft of the movie version of the book he and Bob Woodward co-wrote. Her draft of All the President’s Men wasn’t used, but it did lead to other writing opportunities.

May the world produce more witty and stylish press critics like her.

← What brand of cigarettes did Christopher Hitchens Smoke: tilling my patch of the content farm
A bunch of happy Cappers →